eWeek’s Jim Rapoza has done a comprehensive survey of Web browsers evaluating their suitability for Enterprise Applications. This is ever more important in the business world as Cloud Computing accelerates and Web 2.0 programs dominate new Enterprise Applications . Also Netbooks/Smartphones are becoming ever more prevalent with much better browser and Web connections. So businesses can no longer afford to make the status quo decision on a browser – there is too much at stake even sticking with the prevalent IE browser if only because of the many changes to IE’s interface and operations. But there is lts more reason – all the other browsers have gotten so much better. Hence the potential interest in and importance of Jim’s review.

Jim has long been one of the most independent and forthright reviewers of browser software. For example, he was one of the first reviewers to highlight the vastly improving performance and features in the Firefox and Safari browsers. Likewise he has promoted some of the nifty innovations in the Opera browser. So I was surprised to see three major flaws in his Enterprise Browser review.

The first major problem is not Jim’s line-up of browsers but rather which version was chosen:
Apple Safari 3.2 – instead of the stable 4.0 beta publicly available for last two months
Google Chrome 2.0 – latest release
Microsoft Internet Explorer 8.0 – latest release
Mozilla Firefox 3.01 – instead of stable 3.5 beta available for the past 4 months
Opera 9.6 – instead of the 10.0 snapshot also publicly available
There is a failure to at least notify the public of the soon to be released and vastly improved Apple Safari 4, Mozilla Firefox 3.5, and Opera 10.0 browser.  All are publicly available, will see release well before the year end and, given their superior features and performance, should be a part of any enterprise level assessment of browsers.

The second problem is with the speed rankings in the Overall Ratings chart:

source:eWeek Enterprise Browser Analysis
This performance problem is related to the first because the latest and best near-term browser technology does not get presented for users consideration – only Google Chrome and Microsoft IE have full presentation of their browser capaibilities. But there appears to be a misjudgement on the relative speed and performance of the browsers. The very recent chart from betanews shows the relative speed performance: 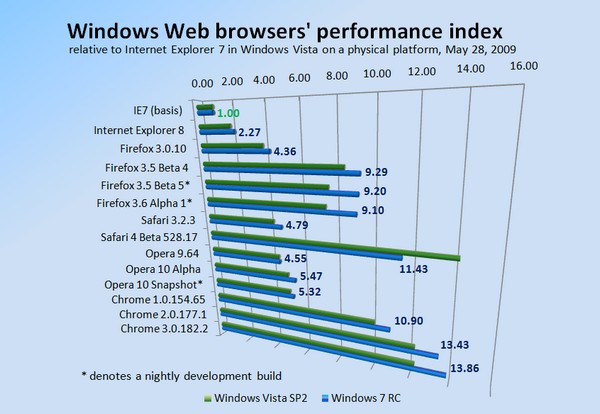 Clearly FireFox 3.0 does not deserve a Fair ranking along side IE8 when it nearly doubles the performance of IE8. Likewise upcoming FireFox 3.5 and Safari 4.0 will certainly be challenging and in the Excellent performance ranks respectively. Meanwhile Opera’s Excellent ranking appears to be an overrating. The following browser speed tests would lend credence to the above observations:
From Techradar – Smaller numbers mean faster performance.
IE8 5708.4ms / 5632.4ms
Safari 4 beta 994.0ms / 1138.6ms
Firefox 3.1b3 1865.0ms / 2004.8ms
Chrome 2 beta 991.2ms / 976.0ms

In sum, I would expect Firefox to have its Fair performance rating upgraded to Good at the very least, Safari to Excellent, and Opera to be downgraded to Good.

This blog has been following the Web standards adherence for the past five years, and there is no doubt that IE has the poorest record by far. With IE7 and again with IE8 there was great hope in the Web development community that Microsoft would finally deliver on their decades old promises to:
1)to fully implement HTML, CSS, DOM, and JavaScript standards;
2)and bring there browser extensions inline (read deprecate) with W3C and general Web standards.
After 5-6 years of no updates to Web standards, Microsoft has failed to deliver yet again. Here is an example of CSS non-compliance. For a company that could marshal 1000’s of developers to wrest the browser market share lead from Netscape aided by “cutting off the oxygen” tactics – the company’s spokespeople now claim “resource constraints” as a primary cause of their inability to deliver 10 year old standards compliance.

This has meant 10-40% more time has to be devoted to Web projects in order to make them run properly in IE. And Redmond continues to drag its feet or attempt to extend with proprietary features such key technologies as JavaScript E4X; DOM enhancements for new browser technologies like tabs and gestures; refusal to implement SVG and XForms; plus delays and proprietary proposals for HTML 5 – the record of deliberate malfeasance on Web standards by Microsoft in IE is undeniable. Thus a poor rating would send a strong and unequivocal message to Redmond – the company has not done nearly enough for the Web development community. Internet Explorer in its latest IE8 version is still lagging way behind in Web standards. Finally Microsoft’s continued laggard and often time obstructionist behaviors in Web standards compliance and development is unacceptable.

Although I agree substantially with Jim’s browser ratings I differ in a number of  notable cases. I would raise Google Chrome’s rating in Security from Fair to Good because some of its pioneering security innovations including each browser windows running in its own security sandbox. I would raise Firefox’s Standards rating from Good to Excellent because Mozilla and Firefox are always in the top 3 in standards compliance and are leading the way on E4X, SVG, HTML 5, and XForms delivery. In addition with the new 3.5 Firefox browser I would raise the performance from Good++ to Excellent and Browser Features from Good++ to Excellent. I would raise Opera’s rating on Features from Good to Excellent because Opera has consistently pioneered (and been imitated by other vendors) with features like gestures, text to voice, tabbing, and a visual carousel of frequently-visited sites. These changes when applied to Jim’s table of ratings:

bring his overall argument into sharper focus. Yes, indeed IE is the distinct laggard in Web browser capabilities and Enterprise IT managers should not let IE’s ease of installation and administration leave their  users with a distinct competitive disadvantage, especially in the fast moving Webscape. Also with the release of Firefox 3.5, it has clearly become the best Enterprise Browser available on the market – no small achievement for a browser that debuted just 5 years ago and depends on Open Source development.
Original Release: May 31st, 2009
Updated July 27, 2009 for Apple safari 4.0 and Firefox 3.5 release