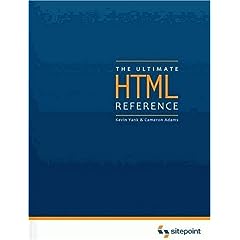 This book is not the Ultimate HTML Handbook for two reasons. First,  much of its content is already dated with the rapid change in HTML and browser capabilities making Ian’s good work on compatibility with browsers unfortunately out of date(he does not know of IE8, FireFox3, Google Chrome, Opera 9.6, …). It also lacks, for obvious reasons of size, a good collection of references/links to other sources and sites on HTML plus the examples have constantly been shortened and reined in. Too bad because the given examples are  so enticing.

An in general this SitePoint book is actually quite good in its layout and content – but to be effective , it really should be an online book placed on a Wiki. That would allow Ian and/or the Sitepoint editors to have the power of the  World of HTML and Web developers to come and update the book’s entries in the wiki.  And this has been done already – a lot of the Adobe documentation is wiki based. PHP has had a similar BBS based system for its Reference Manual.

A wiki-base would also allow great search capabilities making an index moot. As well it should allow for great examples, like the CSS Zen Garden, of HTML code and usage. Finally, it would be a great “pull” to the SitePoint site – with a big payoff in  tastefully placed ads to relevant SitePoint books or other vendors products.

This is a splendid idea – I expect a thank you note from the people at Sitepoint. As it turns out SitePoint is doing this right now … sort of. You can join the site and add comments and suggestions but not direct updates as in a wiki. I think of it as close as in HorseShoes, but not the real deal. People will surely come for the HTML reference (and also CSS); but not for the community of maintaining the most update and well exampled reference on HTML available on the Web.